In 1983 Cordeaux held a small exhibition of knitted works in Lyttelton and, encouraged by the positive response, produced a substantial solo show at the Canterbury Society of Arts Gallery, Christchurch, in 1984. This was titled - somewhat controversially - Wrinkled Bellies.

“Wrinkled bellies, the inevitable aftermath of childbirth, have become an art form at the hands of a Lyttelton-based artist, Judith Cordeaux. As a child, she was disturbed by the lines on her mother’s stomach. Later, as a mother herself, she found similar wrinkles on her own belly and, studying them, began to see them as no longer ugly, but symbolic of motherhood."  ‘I began to see beauty in these lines. Just as there is softness in the breast, so too there is softness in the lines of childbirth’.

“These ideas inspired “Wrinkled Bellies”, a series of wall hangings knitted on circular needles. The hangings are done in wool because ‘the fibre reminds me of the softness and elasticity of skin, and because in our country working in wool has been traditionally the work of women, and above all, of mothers.’ ”(The Press, 19 December 1984). 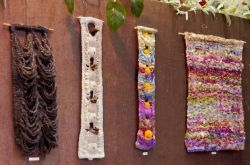