The English poet John Milton invented the word pandemonium as the name for the capital of Hell, in his epic poem Paradise Lost (1667). It derives from the Greek words “pan” ("παν"), meaning "all" or "every", and “daemonium” ("δαιμόνιον"), a diminutive form meaning "little spirit", "little angel", or, as Christians interpreted it, "little daemon", and later, "demon". In modern English, pandemonium has come to mean a wild uproar or unrestrained disorder; tumult or utter chaos.

On 20 November 2019, Timaru was hammered by a destructive hail storm. The sky turned black and the approaching storm was heralded by a terrific roaring sound. Giant hail stones – some as big as hen’s eggs and golf balls – smashed roofs, windows and cars, stripped trees bare, and shredded home gardens. Some businesses were forced to close temporarily and emergency services throughout the city were stretched. After a night of extreme thunder and lightning, parts of the town remained covered in drifts of frozen hail that lasted for much of the next day. The resulting insurance bill for $170 million made it New Zealand’s costliest weather event this century, and one of the top five most expensive natural disasters since records began in 1968.

I responded to the panic and pandemonium resulting from this event of Nature with a mixed media series using pieces of hail-damaged acrylic sheeting, broken glass, recycled packaging, and “emergency orange” spray paint. 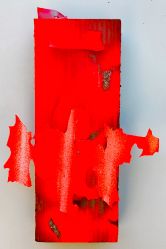